The Mechanical toolset (previously referred to as AutoCAD Mechanical), now included as part of the AutoCAD including specialized toolsets offering, can help save many hours of design and rework by automating many common tasks. Read more about this blog article that details the productivity gains that users may experience when using AutoCAD with the Mechanical toolset rather than just basic AutoCAD.

Increase productivity by up to 55% with industry-specific tools for mechanical engineering, including 700,000+ intelligent parts and features.

With the Mechanical toolset, you can: Access the library of standards-based parts, tools, and custom content; customize properties of object types and create them on custom layers; automate tasks such as creating bills of materials (BOMs). You can read the System Requirements for AutoCAD 2023 here.

Produce accurate drawings with standard components to support ISO, ANSI, DIN, JIS, BSI, CSN, and GB standards. Create and save custom content through the Content Manager, which enables you to add a part or feature to a content library. You can use one of the following ways:

The first 4 methods enable you to create items that do not exist in the standard part content library. The last method lets you create an item that is a variation of an existing standard part or feature. For example, a steel shape with chamfered edges. If the selection set you are adding as a new item contains parts or features inserted from a content library, they are ignored. However, if you explode them beforehand, they are not ignored.

Save time with commands that create mechanical layers—so you don’t have to do it manually. There are some significant differences between how you manage layers in AutoCAD and AutoCAD Mechanical. AutoCAD Mechanical commands, using a feature that is known as Automatic Property Management, are pre-configured to create objects on specific layers. Regardless of what layer is set current, these commands create geometry/objects only on the predefined layer. If the layer doesn’t exist, the command automatically creates the layer. Settings such as layer color, line weight, and line type are taken from a set of pre-configured settings that are referred to as layer definitions.

AutoCAD Mechanical ships with 31 layer definitions, which have been assigned to different objects by default. The names of these layers begin with “AM_”, followed by a number or a phrase as described below.

Get more work done in less time. Use abbreviated dialog boxes to set preferences for power dimension commands for the current standard. Use this dialog box to set preferences for Power Dimension commands for the current standard.

AutoCAD Mechanical toolset uses several scaling mechanisms such as scale areas, detail views, and annotation views, that are not available in AutoCAD. Power dimensioning recognizes the scales and automatically compensates for them. If you choose to honor AutoCAD scale factors and use different scales in different places in a drawing, AutoCAD Mechanical toolset’s scaling mechanisms may not reflect the correct dimension value.

Note: This setting is not available for Inventor linked drawings.

Sets how often the dimension text editor appears during a command session.

Enables the display of the text override prompt enabling you to modify the dimension text on the command line during the dimensioning process. By default, this check box is cleared. The symbols with libraries that are accessible from the ribbon are:

The symbols with libraries that are not accessible from the ribbon are:

The symbols that do not support symbol libraries are:

When you add a symbol to the library, you are prompted to provide a unique name for it. If the name is longer than the available space, the name is truncated in the library. However, when you move the pointer over the name, the entire name appears in a tooltip. Additionally, the tooltip shows a summary of the settings for that item.

You can import a symbol library from another drawing. However, the drafting standard and revision of the symbol you are importing must be the same in both drawings.

Note: You can import a symbol library of another revision (but same standard) providing the following conditions are met.

Get the most out of your notes with formulas that automatically apply to an object. Use a template from a predefined set to display meaningful context-sensitive information immediately, instead of having to do it yourself. Create a leader note and, attach it to an object in the drawing area.

Notes can contain plain text or formulas. A predefined set of templates containing formulas are available in the symbol library. An appropriate template is automatically applied when you attach a note to an object. Hence, notes automatically display meaningful context-sensitive information immediately upon creation. 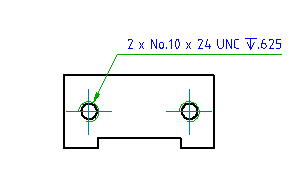 Aligns two or more leaders to one another.

Specifies that the symbol text is obtained from a template in the symbol library.

Specifies the position of the leader arrow. If you attach the symbol to an arc, circle, ellipse, or spline, AutoCAD Mechanical toolset automatically determines the start point and does not display this prompt.

Specifies the location of the next vertex of the leader.

Places the symbol at the most recently clicked location.

Customize drawing borders and title blocks to work with your system. Each of these items exists as separate .dwg files, which you can copy and modify to optimize your configuration. Drawing borders are shipped as *.dwg files that contain specific formatting objects, which are required by the AMTITLE command.

AutoCAD Mechanical toolset ships with several drawing border dwg files for each supported drafting standard and paper size. For example, the drawing border for A4, landscape for the JIS standard is jis_a4l.dwg. You can copy these files, customize them and configure your system to use the customized drawing borders. 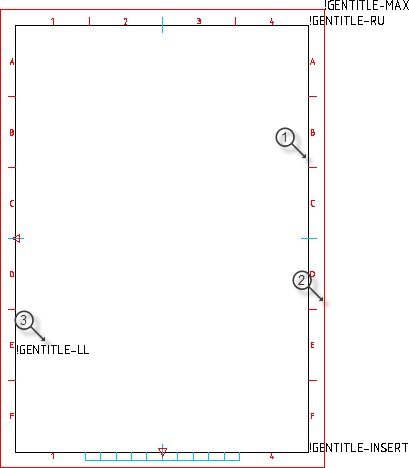 Use intelligent drafting tools made specifically for mechanical design. Boost drawing productivity and efficiency with reusable detailing tools such as Centerline, AMSHIDE, Hole Charts, and Scale Area for Viewports. Combine automatic part creation with drawing automation to get the best value. Efficiently analyze designs and perform 2D calculations such as FEA, Shaft Calc, and Moment of Inertia. Autodesk combined seven industry-specialized toolsets into one version of AutoCAD, and one of those is the Electrical toolset. You can read more about this change here.

Need to find out which AutoCAD is right for you?

What is BIM (Building Information Modeling)?

What is Autodesk Construction Cloud?

Electrical toolset is included with AutoCAD

Growing Your Architecture Firm with BIM

Jack Barrett is an Account Executive for Microsol Resources focused on engineering and construction firms in New York. Jack has a solid background in solution selling and provides a unique insight into the AEC industry and the technology trends. He has worked with AEC firms in assisting them with the software and services that provide Microsol Resources customers with the power to solve their business, design, and environmental challenges.